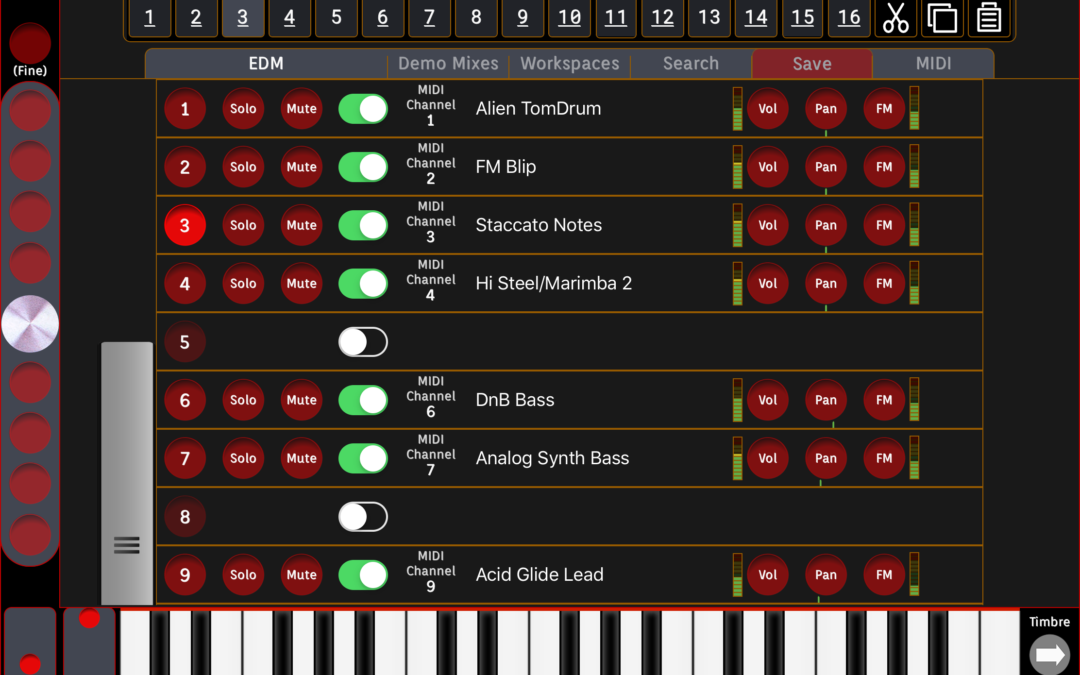 Synclavier Go! was well-received at launch, but it keeps on getting better. Cameron has been working hard on a new feature: the latest release sees the Tracks tab making an appearance, right next to Tour, Library, and Timbre tabs. This really brings to the fore the multi-timbre capabilities of this stunning iPad synth app. Now you can set up your timbres on the various MIDI tracks, and save that arrangement in your custom settings, giving it a “mix” name. On the Mix sub-tab, you can also set volume, pan, and FM amount, of individual tracks, or map these parameters to MIDI commands for real-time expression.

If you’re into composing multi-track synth music, you should check-out this new feature. And if you’ve been on the fence about using the iPad as a music-making-device, now is the time to take Synclavier Go! for a spin: it’s a serious compositional tool that sounds great and is a joy to use.

With the Tracks feature, it makes it so much easier to set-up Synclavier Go! in a workflow that rocks. You can send multi-track MIDI to Go! from hardware or software sequencers through Virtual MIDI (another iPad App, such as Nano Studio 2), Audiobus, or InterDevice Audio (e.g., from ProTools), or even over bluetooth or Wireless.

And as if that wasn’t enough

We’ve been working in coorporation with Red Sky Lullaby, aka, Stuart Kilbride and Paul Schilling to bring you two new Featured Artists Timbre libraries, built into Go! and at no charge!

A major reason people have been loving Go! is the 900+ presets from the original Synclavier II machine. While those authentic vintage sounds are fantastic, we know the DSP sound engine is capable of newer-sounding results too. So we got some new ones built! Now, there’s no stone left unturned in our preset libraries. If you want ambient soundscapes or industrial-strength EDM, you’ve got it. And then, when it’s time to go “retro” you still have the countless original presets used on many hit records and film soundtracks.

We’re really proud of Synclavier Go! and pleased with all the positive feedback. With these few features, Go! is a fully-fledged, very competitive proposition, not just in the iPad app space, but compared to any digital synthesizer available today. And we want to continue to make it even better. As more people flock to this application, watch this space, we will continue to make it even better.